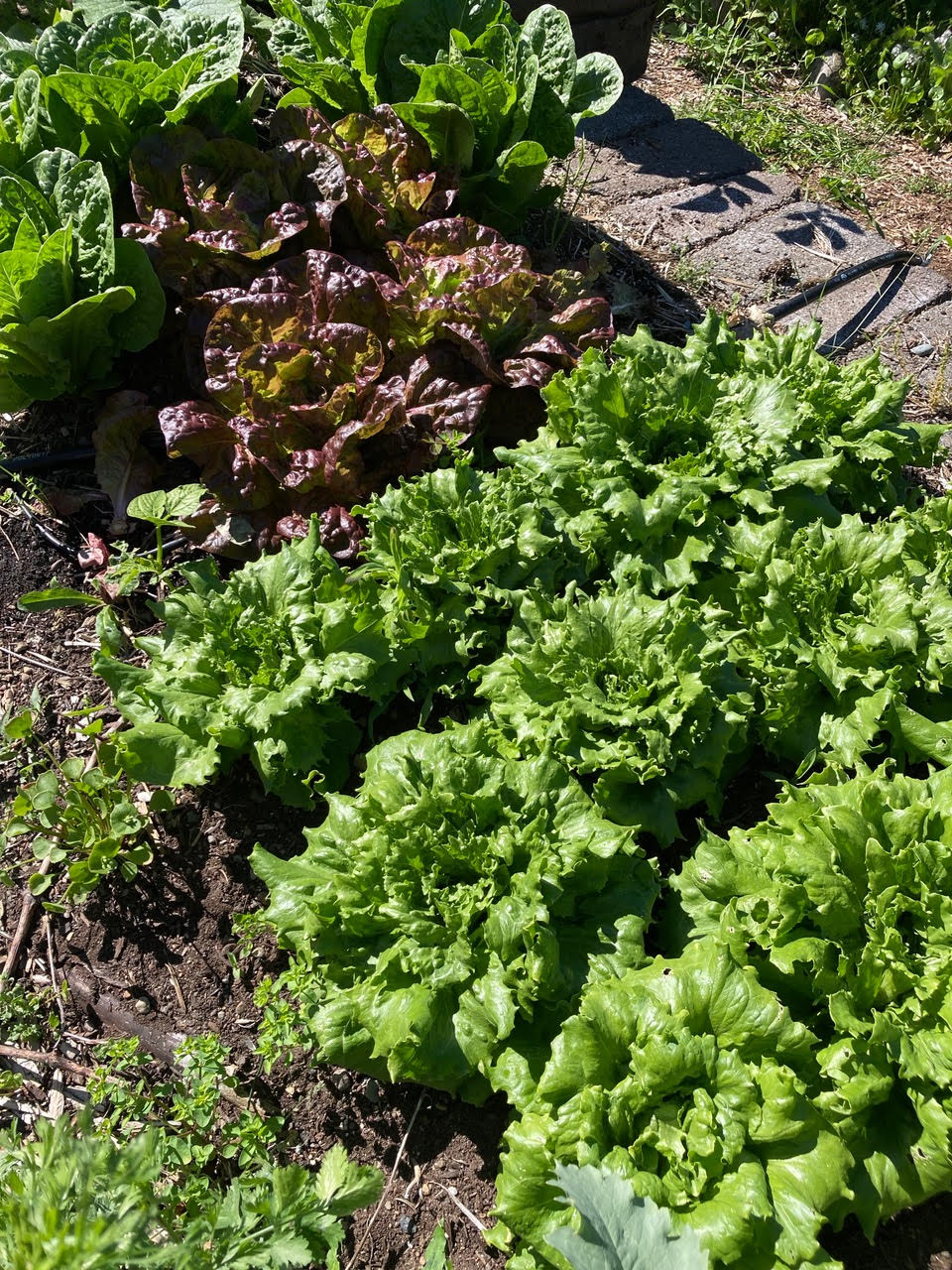 The peak of summer brings the best of all worlds for the greenhouse gardener. Early tomatoes, the first zucchini and loads of strawberries. But there is another thing summer brings. The chance to start winter vegetables in your greenhouse. 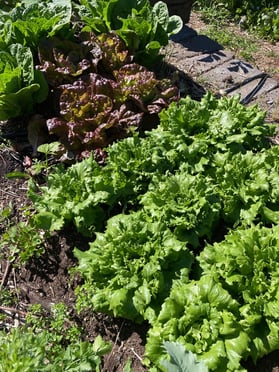 While it may be hard to give away all the lettuce you are growing in June and early July, the greenhouse harvest in November is slim by comparison. Why not grow a few things under cover in your greenhouse not to stretch and extend your season? Cauliflower and other later crops are ready to eat by November or later if started now. This double-cropping makes the best use of the space you have and allows you to raise more food in your limited greenhouse space.

While tropical plants like cucumber, tomato, tomatillo, eggplants and peppers need heat to keep growing, there are many cold-tolerant crops that can be started now to slip into the gaps in your greenhouse when temperatures dip.

My favourite treat for the late-season garden is the bright green, cold-tolerant resistant Susana and the gorgeous, Spiky Veronica cauliflower. I also started these early this year, planted both indoors and out and have eaten my greenhouse plants while still waiting for outside cauliflower to mature.

Other crops for winter greenhouse growing include spinach, which can be direct-seeded among your existing plants any time this summer and will germinate in fall.  I also love arugula (rocket) because it can also be seeded directly in the greenhouse soil or started as small plants and inserted into growing gaps.

Last year I started green onions in small flats in my greenhouse in mid-summer and transplanted the slender stems into gaps that appeared as I removed lower leaves from my tomatoes. I harvested them all winter as needed. I also start a range of edible greens including lettuce, beets, kale and even parsley as space allows. 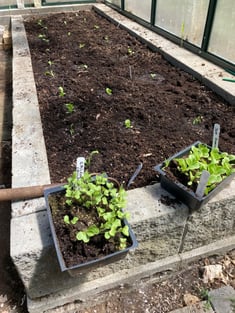 It takes a couple of weeks to start seedlings in an open flat and this can be done on a small seeding table or bench area in your greenhouse. If there is no bench area, it is okay to start them outside or simply in your home. I cover flats as soon as seeded and watered. In about two weeks, seeds have sprouted and can be transplanted into 4" pots and kept under the greenhouse bench in a shadier spot until needed. Most cauliflowers take about four months from transplanting to harvest and holding them a bit in their small pots lets you stretch the final harvest season.

A tomato crowed by late-season broccoli suddenly died while I was away but no problem. I have plenty of tomatoes producing fruit now and this new gap allows for transplanting a later crop. Taking time this summer to start a few fall and winter plants gives you something to fill these gaps, especially once fall harvest leaves spaces and openings.

If it feels too soon to start new plants now then simply order seed now and consider starting it over the next month or two. The key is to start and establish young seedlings when light is good and before cold weather sets in. I know it is barely summer and we are dealing with heat and watering right now but come November and December it will be a treat to have edibles to look forward to from these staggered plantings.

Gardeners often choose to heat their greenhouse, but many of the fall and winter hardy crops tolerate frost and heavy freezing. They grow well with a light layer of Floating row cover, such as Agribon, laid over them once temperatures get cool much later this year. More on this later when we need to know when and what to do for winter protection.

While spring crops are likely to get attacked by spring-hatching insects like flea beetles and cabbage butterflies, later crops are more bug-proof, simply because the normal pest cycles are slightly off for later crops. Grow more, grow pest-free. It is a great way to make use of the greenhouse space you have.

PS Bug of the week: 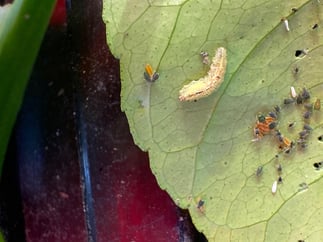 Potatoes and tomatoes are suffering from flea beetles this month. These tiny shiny black or brown beetles gnaw perfectly round holes in the leaves of many plants including tomatoes. Although they are worse outside, it is good to know what is causing this damage so you can consider your options, especially if they also appear in your greenhouse. Here is an article about flea beetles, who aren't true fleas but seems like them when you see them hop off your plants.

Aphids were a problem a month ago but now the beneficial insects are taking over. Here is a photo of two very effective aphid predators. Syrphid wasp larva and Aphid midges will fly in on their own if plant a few flowers to attract them and you leave your greenhouse doors open to welcome them this summer. Like something out of a horror film, the army of purchased insects sense the trouble-makers and bite their head off as they emerge…. And just like that, my greenhouse... 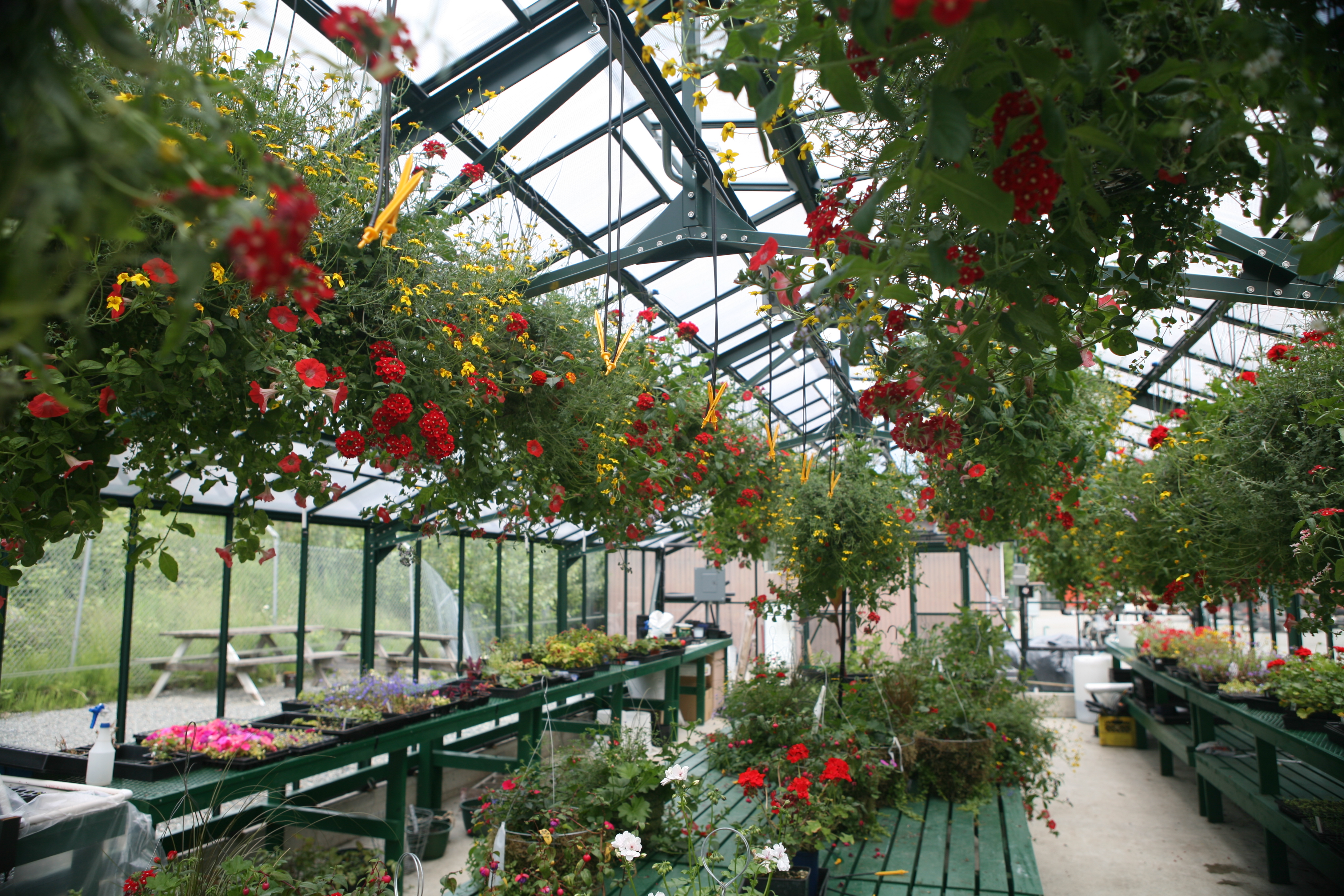 How do you grow?

Essentially there are two ways to grow in soil in your greenhouse. You can grow in pots or you can grow in planting beds. We look now at growing in...