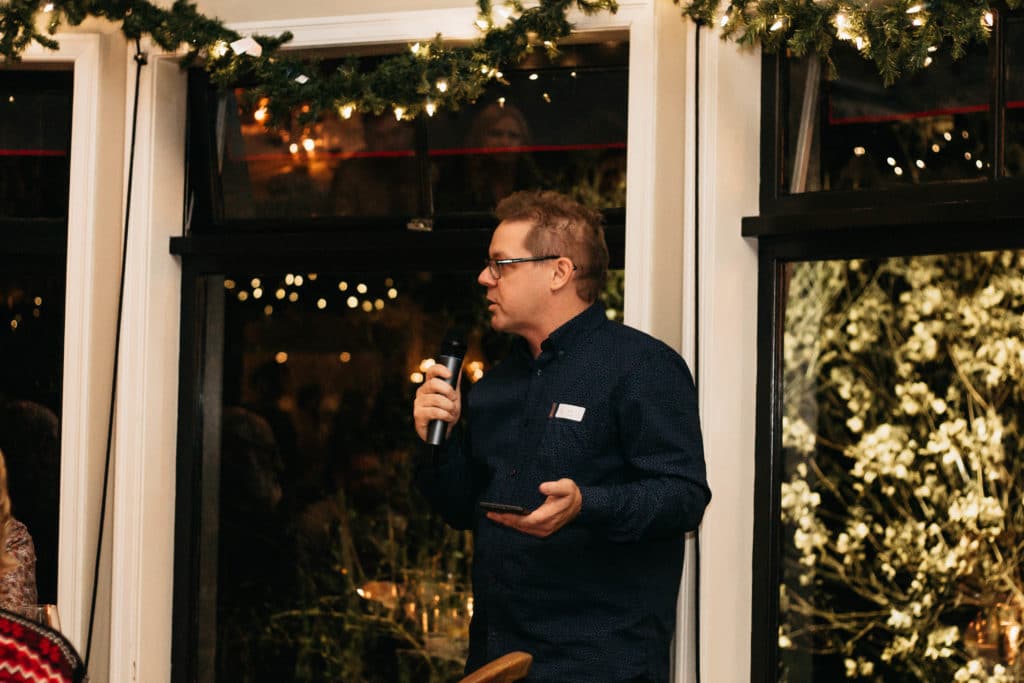 Kyle began his storied career with BCG in 1997. “I actually worked with Rick’s brother in law Roger at Ryder Truck Rentals and he knew that Rick was looking for someone as an office guy. In true Roger fashion, he really oversold it and called it a ‘worldwide conglomerate’ as Roger would do and I thought “Wow, this sounds amazing”.  Worldwide actually meant that the company had shipped a greenhouse to Australia once.”  Flash forward to 2021 with Rick and Kyle at the helm and we truly are worldwide!

Starting out at BCG 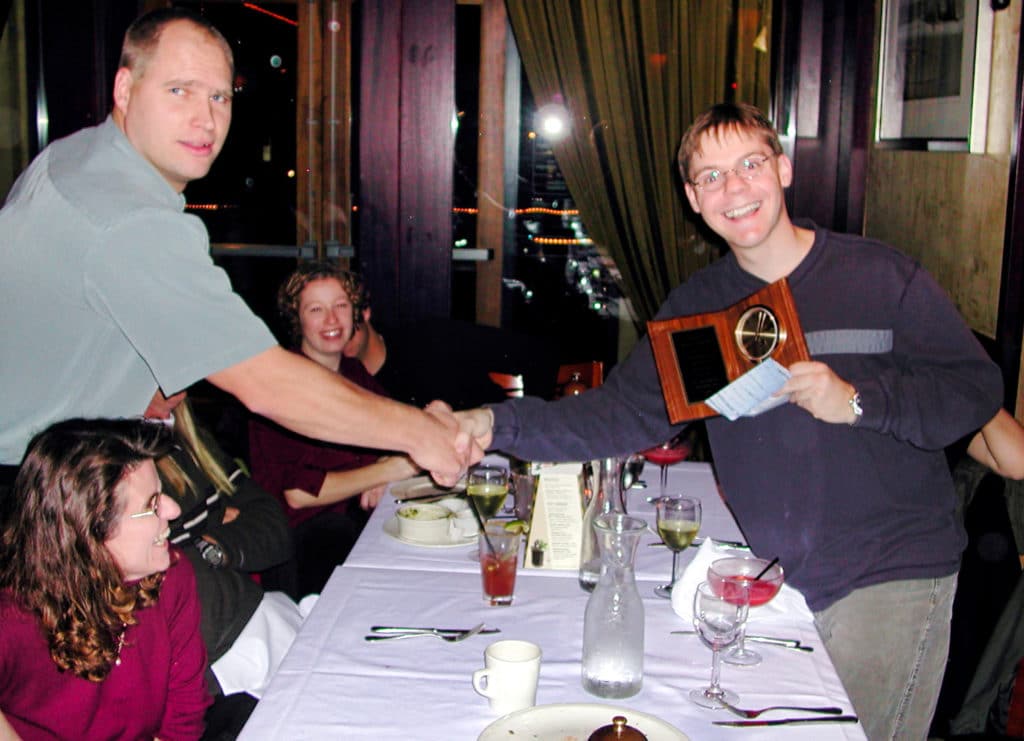 “I was the first person they hired that did not have practical hand’s on greenhouse experience or could actually work with tools for that matter.”

For those that know Kyle, they understand his humor and have likely been the subject of one of his pranks at some point.  “So despite what some people may think, Henry trained me on installs but only on days when it torrentially rained.  I think I impressed him because I worked really, really hard but only because I wanted it to end.” “So this was 1997.  Wayne Heinen “trained me” before leaving for Kelowna.  Put that in quotations,” he says with a smile. “Just kidding.  He was a mentor then and still is.” Back in those days, the staff was small.  It was Kyle and Joanna running the office, three production workers including Rod Wells and Ryan Euverman.  Henry and Greta would come in once or twice a week for accounting or marketing work as they had mostly moved out of the day-to-day operations at that time.  Rick was running site visits and the solarium division too.

In the early days, can you point to a transformative moment where you could see where the company was headed? “Many moments. Our first internet sale in 1998. You can ask Joanna because she still remembers that customer’s name.  We both looked at each other thinking ‘He just bought this greenhouse sight unseen’. He had the confidence after speaking with both of us and we knew we had to do the best job for him and build the best greenhouse we can. The philosophy is still the same.”

“I also think about when we moved to Port Kells and Jay became Production Manager and revolutionized the way we fabricate by creating stations improving efficiency and building a quality control system,” Kyle says.

The other aspect of BC Greenhouse Builders that has grown immeasurably is our retail network.  We have retailers all over North America and Sweden and Iceland too.  “Back in the day, we were getting inquiries from companies that were interested in selling our greenhouses. Charley’s Greenhouses in Mount Vernon Washington was the original. International Greenhouse Company and ACF Greenhouses came on board in the early days too.” Rick and Kyle with Thomas Hobbs. Tom continues to be our best returning customer in our 70 year history!

“I think it says something when almost all of our early retailer relationships are still in existence today,” I say.

“Yes, I think it’s because we like each other.  We have grown and supported each other and that’s really gratifying” says Kyle.

I always like to ask if a team member has a favorite project as it provides a different insight into their history and perspective.  “One that really stands out to me is the rooftop 34x78 greenhouse at Indiana Wesleyan University.  I am all about milestones.  This was a breakthrough event.  It was an institutional rooftop with a partition wall and we were working with all of the stakeholders for the project.  The general contractor and the production supervisor understood that this was an important project for us and they wanted us to do well because they loved the product as well as our customer service. Our team were the guys consistently running up and down the stairs and hustling every step of the way. It was very successful and it became the first of many.” Today and into the Future

In 2020, our team increased by almost 30%. We have added some key people this year that will fill out operations including a Quality Assurance Technician, Lead Night Shift Supervisor and more.

“The success always comes back to the team. We can’t do it without marketing, Greg and production design, Wayne and all of our sales team, Cody leading production, everyone.  The Brooklyn School of Inquiry project -we could have never completed that project without the team we have in play.  The planets definitely aligned on that one.  Danny and Kevin working together – we are unstoppable in the custom world,” says Kyle.

“The installers and supervisors that work with us like Nathan, Everlast, Davis and Clear Choice team, they make us look good. I think about people like Rod doing technical support and he calls it ‘just making friends’,” he laughs.

How do you attribute the growth?  “The last two years have been the best of times and the worst of times.  Prior to the pandemic we were on a good healthy path with consistent manageable growth and then the world turned us upside down.  Without getting emotional, just being to be able to work with the team that we had and the people who came on board when we really needed help, and seeing everyone stretch and grow and help each other and be empathetic for each other when they needed it, that part has been the best for me.  Just to see my work family grow the way we’ve grown.  Right now I believe we have the best team we’ve ever had, at least in my history.  I can say that honestly because we still have the same people from when I first started plus a lot of the people that have joined us along the way,” Kyle laughs.

Wayne Pires, Sales Manager of BCG, says this about Kyle: “When I joined the company 8 years ago, I knew this was the company I was looking for. Nothing corporate about it at all. Kyle is what makes BCG fun and he is the spirit of the company. He is always happy, funny and positive. I have been in sales for over 40 years and still Kyle was able to teach me something. He would always say to me “Don’t get stressed out. Remember at the end of the day, you are selling greenhouses. What can be stressful about selling a product that customers are going to enjoy for the rest of their lives.” There is another important shout out that is very necessary. Kyle’s wife Brenda has attended more sales lunches, company events and retailer meet up’s than most of the long-term employees here. Thank you for representing BCG so well Brenda! Kyle and Brenda had a milestone moment themselves when their son Anson left for the University of Victoria this fall.  In 2019 Anson attended the National Canada wide Science Fair as a finalist with his “Intra Urban Grow Box” combining greenhouses and compost.  The apple does not fall far from the tree as they say. Their daughter Eve, 15 years old, attends high school in Surrey and is an active and dedicated athlete in acrobatics and will graduate in 2024. I am not alone when I say that the success and the longevity of key team members, retailers, suppliers and more can be greatly attributed to Kyle and his fun loving personality. Whip smart and forward thinking, the company is incredibly fortunate to have him helping to forge the path to a very bright future.

Thank you for your energy, leadership and friendship Kyle!  Here’s to another 20 years! Rick Heinen - 70 Years and the Future of BCG

Meet some of the team behind BC Greenhouses

For BC Greenhouse Builders' 70th anniversary, we wanted to showcase our employees, our craft, and our history through a new video. Come celebrate with us, learn about...