Corle ran ahead of me on the beach and stuck her head right into a dead seal. And then she took a big bite.

There is no accounting for taste when it comes to curious puppies – especially Lagottos who are bred to follow their noses.

I usually serve fresh food from our garden to my husband and my dog but not usually the same thing or at least not at the same time. Ends of carrots, dirt-encrusted potatoes too tiny to cook and stubs of broccoli are Corle favourites while Helpful Husband (HH) prefers meat and potatoes with veg on the side.

We are having a rich vegetable soup in late October with greenhouse bush beans seeded in early August and mixed tomatoes planted in spring plus some young seeded in September Pak Choy.  Potatoes and carrots plus herbs from the garden bulk up the soup so I am a bit surprised when HH asks:

"Why don't you plan some kind of rotation so you have a continuous food supply in the greenhouse?

“Um, have you been out to the Greenhouse Garden lately? I am growing a great crop of Pak Choy (also called Bok Choi) right now and we still have tomatoes from spring and peas from an early August seeding. We had the last of the green beans in the soup tonight, and the cauliflower I planted in July when I pulled out the zuchinni is almost ready to pick.” I seeded the cauliflower June 22 and once the zucchini crop was blooming outdoors I pulled the greenhouse plants and transplanted the cauliflower. The zucchini followed the potatoes growing in the ten gallon Root Pouch bags started over the warmed soil in February and moved outdoors once the weather settled in May.

Watching plants grow seems like a passive pastime but for a gardener it is a fascinating and shifting ballet: especially if you seriously manage your greenhouse space for food production and variety.

Obviously HH missed the point and didn’t notice the February planted potatoes we started eating in early June or the radish and cucumbers we gobbled down from the greenhouse in May, June and July. The truth is I don’t write any of this on a chart on the fridge.

How to create a rotation in the greenhouse

My secret with greenhouse growing is to look for openings and opportunities and to always be ready with seedlings. I start seedlings of cabbage and broccoli and cauliflower and pop them into the soil as space becomes available. Quick-growing seedlings like lettuce, radish and green onions are usually direct-seeded. 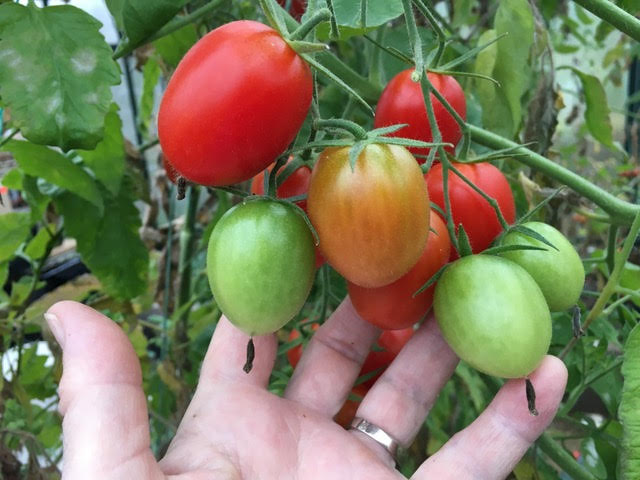 I manage the crop rotation so there is always something new in the greenhouse while the old plants continue producing. So to the uneducated eye it always looks the same in my greenhouse. Juliet Tomatoes, for instance, will be pulled this week even though they still look great. I don’t heat the greenhouse in winter and the light levels are dropping now which means the fruit production is dropping.

Cue the orchestra: about 60% of the greenhouse is now planted to low-light leafy crops like spinach and Pak Choy or root crops like beets and carrots.

“Heh, maybe we should buy beets,” HH suggests while we are at the farmer’s market picking up honey and eggs. “Umm, we have those in the greenhouse, I remind him. I planted them after we finished eating that early crop of Salanova lettuce in June.

I start to think maybe I have been pampering HH a bit too much. I’ve been serving him freshly made soups and dinners he raves about but clearly doesn’t connect to the garden or the greenhouse. Tonight’s soup, for instance, had food fresh from our greenhouse: tomatoes, beans and Pak Choy. From the outside garden, I picked carrots, potatoes and broccoli. Tango celery went into making the broth that was the base of the soup.

Tonight I’ll be picking that first big head of cauliflower and the Red express cabbage to roast with the Pork Schnitzel I am making for dinner.

Perhaps HH needs a menu placed in front of him every night highlighting the plants grown in the greenhouse. This might help him realize the intense rotation I employ to get such a variety of food in such a regular back yard with the help of our greenhouse. Or maybe I’ll make a big chart on a whiteboard so he can monitor the progress over the season.

What kind of help do you need to maximize the space in your greenhouse? Now where did those potatoes I picked for supper go? Corle? How Much Food Can Your Small Greenhouse Grow?

We get asked regularly "how much food can I grow in one of your smaller greenhouses?" Sunshine on Your Face in the Greenhouse Garden

I close my eyes as I bask in the sun, heat on my face. I take off my jacket and then my hat. My neighbors, friends and...